Listen as we decode daily disciplines, favorite books, favorite Baronfig products, and more with Joey Cofone, Founder & CEO of Baronfig and author of The Laws of Creativity. We also cover the best advice he’s been given by mentors as both a founder and author.
Written by
Daniel Scrivner
Last updated
October 20, 2022
–
6
Min Read
Share 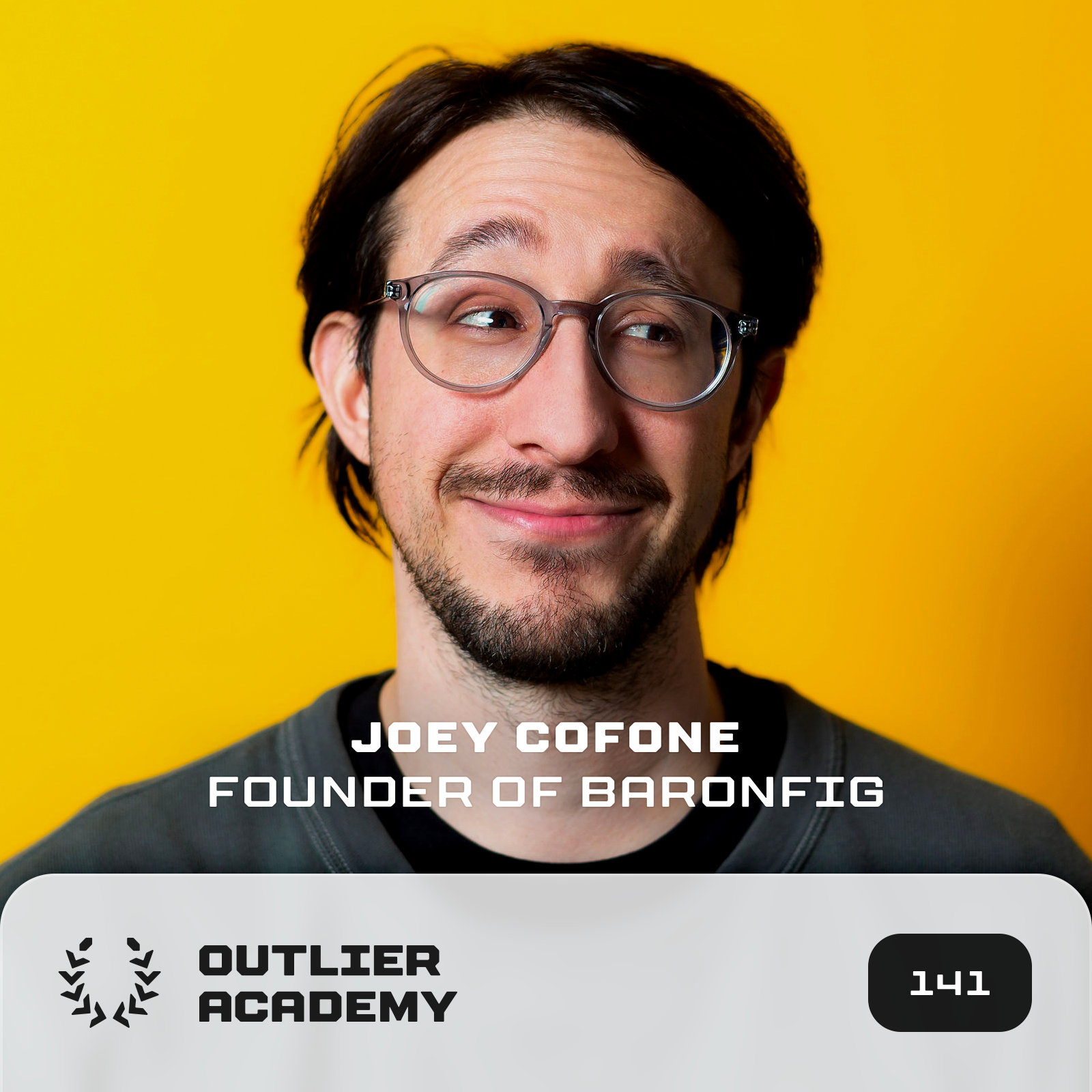 Joey Cofone is the Founder & CEO of Baronfig and an award-winning designer and entrepreneur. His work has been featured in Fast Company, Bloomberg, New York Magazine, Bon Appétit, Quartz, Mashable, Gizmodo, and Print, among others. Joey was named a New Visual Artist and, separately, Wunderkind designer by Print magazine.

He strives to make work that appeals to curious minds—work that’s beautiful, smart, and communicative. He believes that design is the least of a designer’s worries, that story is at the heart of all tasks, and jumping off cliffs is the only way to grow.

Joey Cofone shares the lessons he’s learned as an award-winning designer, the Founder & CEO of Baronfig, and the author of The Laws of Creativity, including why he’s fascinated with the juxtaposition between skill and renown, how he worked with James Clear to design the Clear Habit Journal, why experimentation is Baronfig’s most important value, how rock bottom taught him how to take risks, and so much more.

“There’s a stereotype of creatives, which is that they’re just flying by the seat of their pants. I’m here to tell you that it’s absolutely not true. We need to separate that from what creativity is. We need to decouple this ridiculous stereotype so that more people can blossom creatively.” — Joey Cofone

The Phantom Tollbooth by Norton Juster

Joey also shared his favorite products of Baronfig, where he’s the Founder & CEO. They include:

If you enjoyed this episode with Joey Cofone, don’t miss our other interviews with creative and design leaders:

How to Reliably Get Inspired

Joey Cofone explains the two types of inspiration—passive and active—and how anyone can take advantage of them to find inspiration. He also describes how active inspiration works and how it consists of three steps: collecting, assimilating, and combining. If you’re struggling to get and stay inspired, this is a fantastic read.

Creativity and entrepreneurship have a lot of synergies, but they can just as easily work against each other. Joey Cofone walks through how he balances creativity with entrepreneurship at Baronfig. He shares why a great creation does not equal a great seller and why, similarly, a great selling product isn’t necessarily a mind-blowing one.

The Highs & Lows of Creating Baronfig

Joey Cofone shares the highs and lows of building Baronfig over the last decade, including why the biggest challenge is handling the pulls in a dozen directions in any given moment, and how there’s always something that can be created, improved, or fixed. Building a company often feels like a never ending game of Whack-a-Mole.

The Truth About Creative Magic

While the results of creativity are often magical, the process to get there is not. The practice of creativity is as reliable as accounting and as easy as following these four steps: get inspired, research, iterate, and choose to end. Joey Cofone shares why we have to lean into systemization and systemize the hell out of our creative process.

How to Recognize Good Ideas

Joey Cofone shares his thoughts on how to know when an idea is good and how to go from an idea to the best final solution or product. For him, it involves what he calls the Grok Threshold, which is when your audience understands an idea profoundly and intuitively—envisioning how it fits into their lives and understanding it well enough to be able to share it with others.

All of us struggle with personal accountability and honoring our commitments. Joey Cofone shares the four strategies he uses to keep himself accountable and use his time effectively. They include having contingencies, giving himself prizes when he hits certain goals, daily habit tracking, and having accountability buddies. He goes on to explain why all of these use positive reinforcement rather than negative reinforcement.

Tagged:
Joey Cofone
,
Founders
,
Peak Performance
,
Books
,
Enjoy reading this? Share it.
Link copied!
BE THE FIRST TO HEAR
Be the first to receive new articles and episodes as soon as they’re released.
Subscribe
FOLLOW DANIEL

Ryan Boykin is Cofounder and Partner at Atlas Real Estate and Cofounder of REACTIV. In this bonus episode, Ryan and Daniel discuss the habits, routines, and tools that help Ryan stay focused.

Rachel Sanders is CEO and Co-founder of Rootine, a personalized micronutrient subscription service. In this episode, Rachel and Daniel discuss data-driven health, recommended books and tools, and the definition of success.

Brian Scudamore is Founder and CEO of O2E Brands, which focuses on home services such as 1-800-GOT-JUNK? And Wow 1 Day Painting. In this episode, Brian and Daniel discuss the power of branding and systematic approaches to business.