#142 The Laws of Creativity: How to Unlock Your Originality and Awaken Your Creative Genius | Joey Cofone, Author & Founder of Baronfig

Learn how to unlock your originality and awaken your creative genius as we break down The Laws of Creativity by Joey Cofone, award-winning designer and Founder & CEO of the much loved “Tools for Thinkers” brand Baronfig.
Written by
Daniel Scrivner
Last updated
October 20, 2022
–
6
Min Read
Share 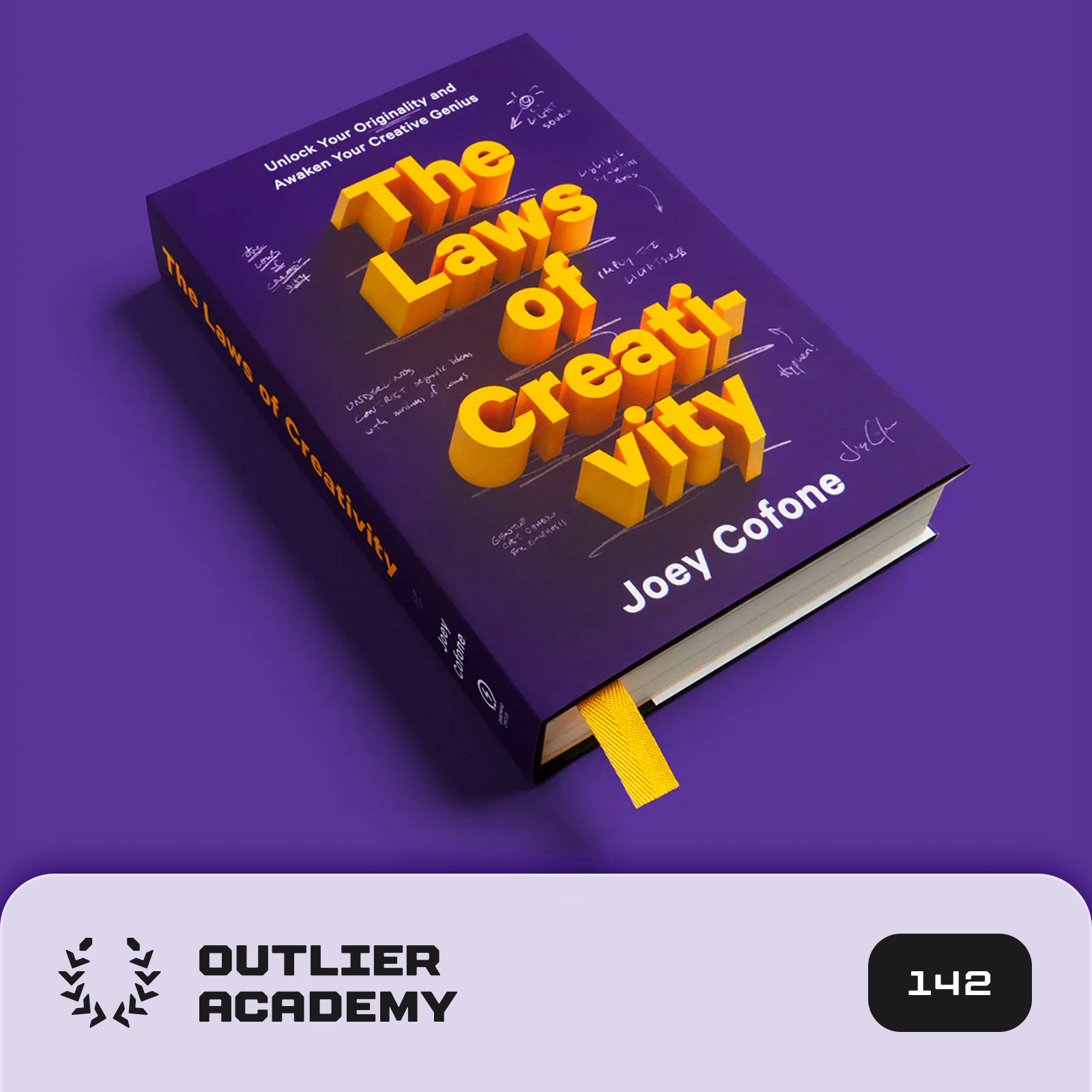 In his book The Laws of Creativity, Joey debunks why creativity isn’t magic and shares what it is, how it works, and how you can harness it in your everyday life. Learn how to unlock your originality and awaken your creative genius with Joey Cofone—award-winning designer and Founder & CEO of the much loved “Tools for Thinkers'' brand Baronfig.

Each of the 39 Laws of Creativity are illustrated with inspiring, enlightening, and surprising stories of iconic creators across history—including Albert Einstein, Serena Williams, Martin Luther King Jr., Harry Houdini, Grace Hopper, Bruce Lee, and many more. Joey breaks down how these titans of history wielded creativity to reach incredible heights.

“Drawing on decades of experience, Joey Cofone has distilled the elements of creativity into an excellent, easy-to-use guide. The Laws of Creativity provides a roadmap for unleashing the creative force inside you.” — James Clear, Author of Atomic Habits

Joey Cofone, Founder & CEO of the much loved “tools for thinkers” company Baronfig, joins me on Outlier Book Club to decode his new book, The Laws of Creativity. We cover why creativity isn’t magic, how creators across history from Albert Einstein to Grace Hopper and Bruce Lee wielded creativity to reach incredible heights, practical ways to hone your creativity, a framework for generating ideas, Joey’s process for writing the book, and so much more.

“At this point in my career, I have art directed over 100 products from a rough idea into consumer’s hands. I’ve collaborated with incredible creators like James Clear and Roxane Gay. There came a point where it was very obvious how it all worked and fit together—because I was always interested not just in what I was doing but how I was doing it.” — Joey Cofone

The Phantom Tollbooth by Norton Juster

Joey also shared his favorite products at Baronfig, where he’s the Founder & CEO. They include:

If you enjoyed this episode with Joey Cofone, don’t miss our other interviews with creative and design leaders:

How to Reliably Get Inspired

Joey Cofone explains the two types of inspiration—passive and active—and how anyone can take advantage of them to find inspiration. He also describes how active inspiration works and how it consists of three steps: collecting, assimilating, and combining. If you’re struggling to get and stay inspired, this is a fantastic read.

Creativity and entrepreneurship have a lot of synergies, but they can just as easily work against each other. Joey Cofone walks through how he balances creativity with entrepreneurship at Baronfig. He shares why a great creation does not equal a great seller and why, similarly, a great selling product isn’t necessarily a mind-blowing one.

The Highs & Lows of Creating Baronfig

Joey Cofone shares the highs and lows of building Baronfig over the last decade, including why the biggest challenge is handling the pulls in a dozen directions in any given moment, and how there’s always something that can be created, improved, or fixed. Building a company often feels like a never ending game of Whack-a-Mole.

The Truth About Creative Magic

While the results of creativity are often magical, the process to get there is not. The practice of creativity is as reliable as accounting and as easy as following these four steps: get inspired, research, iterate, and choose to end. Joey Cofone shares why we have to lean into systemization and systemize the hell out of our creative process.

How to Recognize Good Ideas

Joey Cofone shares his thoughts on how to know when an idea is good and how to go from an idea to the best final solution or product. For him, it involves what he calls the Grok Threshold, which is when your audience understands an idea profoundly and intuitively—envisioning how it fits into their lives and understanding it well enough to be able to share it with others.

All of us struggle with personal accountability and honoring our commitments. Joey Cofone shares the four strategies he uses to keep himself accountable and use his time effectively. They include having contingencies, giving himself prizes when he hits certain goals, daily habit tracking, and having accountability buddies. He goes on to explain why all of these use positive reinforcement rather than negative reinforcement.

Tagged:
Joey Cofone
,
Founders
,
Peak Performance
,
Books
,
Enjoy reading this? Share it.
Link copied!
BE THE FIRST TO HEAR
Be the first to receive new articles and episodes as soon as they’re released.
Subscribe
FOLLOW DANIEL

Dave Eisenberg is Founding Partner at Zigg Capital, a venture capital firm investing in real estate and construction technology. In this bonus episode, Dave and Daniel discuss the habits and routines that help keep Dave focused.

Alexandra Zatarain is Co-Founder and VP of Brand and Marketing at Eight Sleep, a sleep fitness brand. In this episode, Alexandra and Daniel discuss the sleep routines, advice for founders, and recommended resources.

Listen Now
Infinite Games – Macro Thinkers, Investing in Human Capital, and Why Financial Innovation Will Save the World with Ben Savage of Clocktower Ventures

Ben Savage is Partner at Clocktower Technology Ventures, a leading fintech venture capital firm. In this episode, Ben and Daniel discuss investing in human capital, macro investing, and how fintech will save the world.