I sit down with Nathan Baschez — one of the world's leading writers and researchers on business strategy — to discuss why businesses are systems, navigating tradeoffs, and Nathan's writing process.
Written by
Daniel Scrivner
Last updated
November 4, 2020
–
4
Min Read
Share 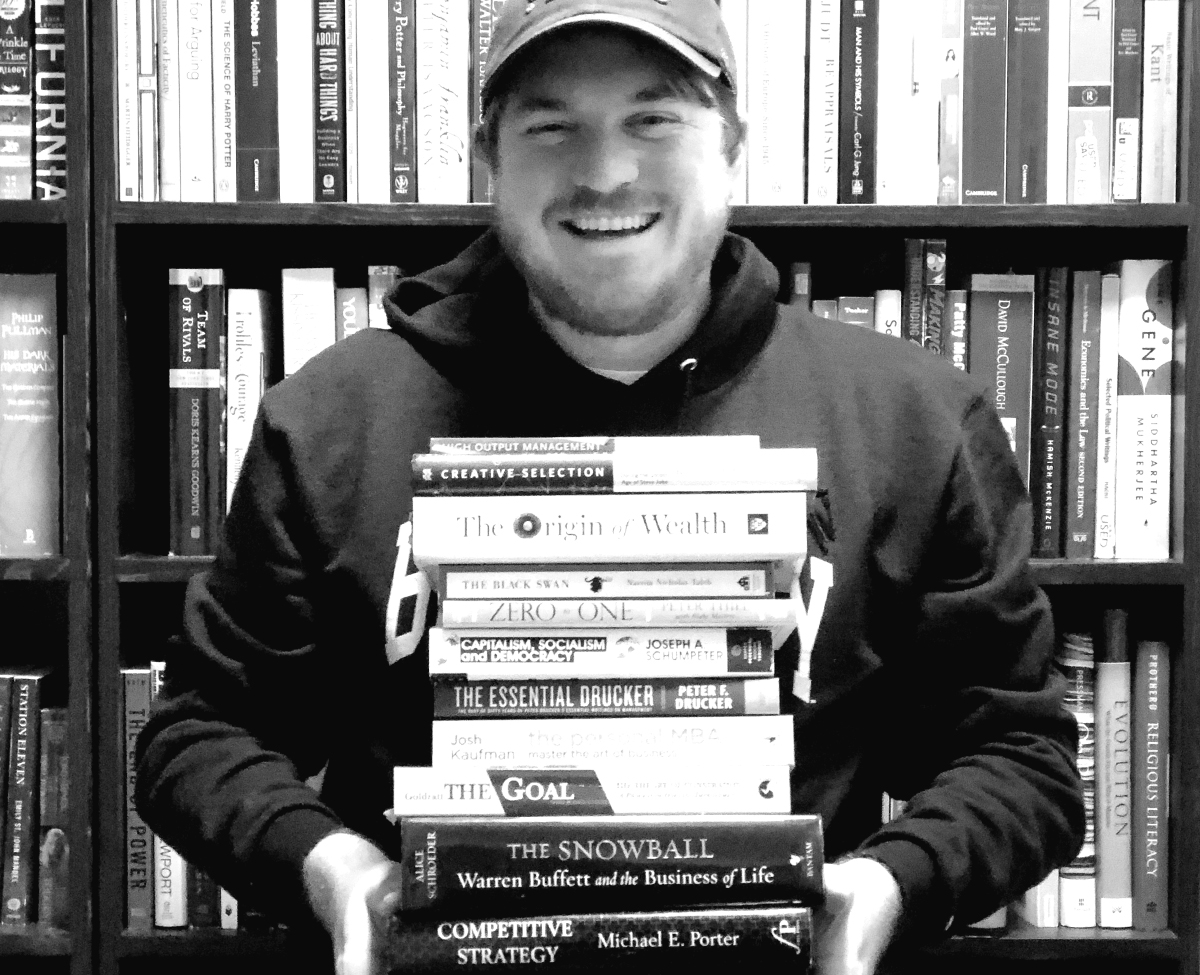 “If you have weak, scattered, or non-systematic observations about the market driving your decision making process, you can make some pretty bad decisions, even if you get all the strategy concepts right.” — Nathan Baschez

In this second episode of Outliers, I sit down with Nathan Baschez (@nbashaw) — one of the world’s leading thinkers, researchers, and writers on business strategy. Listen in as we discuss:

Nathan Baschez thinks startup founders are getting a major thing wrong when it comes to business strategy: They’re so focused on copying success stories that they ignore strategic theories and frameworks.

That’s why he spends his days analyzing businesses and sharing his findings in the newsletter Divinations.

Before Divinations was born, Nathan spent years immersed in the startup world. Back in 2013, when he was fresh out of college and had only five days of coding experience, he co-created Product Hunt. The popular site, which allows people to share their favorite products and write reviews, went on to secure $6.1 million in funding and earn the Crunchie award of “Best New Startup of 2014.”

Nathan already had other plans, though, so he left Product Hunt and spent time at General Assembly and Substack before launching Hardbound, a visual storytelling platform.

Now, he’s on to his next venture with Divinations, which is part of Everything, a paid newsletter bundle he’s building with Dan Shipper.

On this episode of Outliers, I’m talking with Nathan about the importance of business strategy, what he describes as “the art of making decisions.” No, he’s not going to tell you to start studying business plans nonstop, but you’ll only get so far by launching a product that solves a problem. It’s similar to how teams prepare in football — watching replays, knowing the coaches and players, understanding the team’s strengths and weaknesses.

Nathan shares the thinkers, books, and ideas that have most influenced his understanding of business strategy, as well as his favorite piece of advice (hint: it starts with making stuff).

This episode is brought to you by Flow! Every single day, hundreds of thousands of teams in more than 140 countries use Flow to save time, hit deadlines, and work brilliantly. Flow combines powerful features with world-class design, to create a productivity app that you and your team will actually love using. And for the last 18 months, they’ve been working on something big. It’s a brand-new version of Flow, that they call Flow X. And it’s the embodiment of everything they’ve learned helping teams achieve more over the last 10 years. Take your team’s work to the next level with Flow X. To get exclusive early access, visit GetFlow.com/Flow-X.

“I think that I got in my way there of just learning how to be a supportive team member and learning how to listen better and not have all the ideas come from me. It’s one of those things where I’m really glad that I had some opportunities in my career to force me to realize where I could be a better communicator and a better listener.”

“In co-founder dating, you become really great friends and then… at the time when you break up, it’s not because you don’t like each other. It’s just because it’s incredibly rare to have the right timing, have the same passion for the exact same idea. … There’s all these factors that go into it. And so I’ve got a couple of new, really great friends out of the deal.”

“I think that a lot of people focus too much on the strategy frameworks and not enough on the quality of the inputs — ’cause with programming, there’s this classic idea of like garbage in garbage out. If you have very weak and scattered and non-systematic observations about the market driving your decision making process, you can make some pretty bad decisions, even if you have all the strategy concepts.”

“I think there’s an under-appreciation of [basic principles and mental models] in the startup world. There’s a huge appreciation for listening to wisdom from people who have successfully started something before. There’s a lot less appreciation for academia, like business school strategy theory. People don’t nerd out about it as much.”

“I think my implicit assumption going into Hardbound was, if you make a product experience that’s amazing enough, then the business and everything else will work. And I think for certain kinds of products, that’s almost true… But for other kinds of businesses that have more real costs… there are more difficult decisions that come along, and media is one of those businesses that has a lot of real costs.”

Business strategy is underappreciated in the startup world

“I think it’s possible to get way too far in the weeds. It’s not as if the point is to read strategy nonstop, and then you’ll be prepared to start a company, and you’ll have no chance of failing — not going to happen. But I do think there’s a lot of really helpful stuff to have in mind — just basic principles and mental models that help you navigate the decisions you’re making. I think there’s an under-appreciation of it in the startup world.”

Channel Cal Newport’s “So Good They Can’t Ignore You”

“The best spot to be in is when you’re in the intersection of things that are individually hard, and there are very few people in the world who have both domains mastered. You can sit at that intersection and really leverage it to be a super performer.”

Businesses are made up of interdependent systems

“I think the best place to start is just understanding a business as a system of inputs, outputs and feedback loops. It’s really important to look at every piece of the system, rather than just the product. Basically, everything is interdependent.”

How to prevent someone else from copying you wholesale

“Most businesses don’t think clearly enough about trade-offs, and they don’t see trade-offs as an opportunity. The cool thing about trade-offs is they create defensibility, because if you have a system and you’re perfectly dug-in to navigate the trade-offs in a way that works best for the unique value you’re trying to create for your customers, then it becomes harder and harder for people to copy you without copying you wholesale.”

What startup founders get wrong

“I think there are a lot of startup founders who don’t pay very much attention to the strategy frameworks. They have a pretty simple view of, ‘OK, cool. I just need to solve a problem.’… I think you have a greater chance of success if you understand: ‘OK, how is this going to work as it scales? What are the advantages we really have? What are the accumulating advantages we have?’… These are the kinds of things that are really important to pay attention to and to be searching for.”

Staying too on task can deprive you of ‘the good stuff’

“Be more indulgent than you think you should be. I think people have a mindset of being really diligent where they’re like, ‘Oh, I need to do this, so I should do it…’ And you definitely need a lot of that — you need a lot of discipline… But at the same time, you need to balance it with, ‘OK, this is a little different than what we were originally thinking, but this could be really good.’ Allow yourself to go there and maybe just give yourself permission to try it and be like, ‘Yeah, I’m just going to spend an hour on this, and we’ll see.’ That is where all the goods stuff comes from, in my opinion.”

Best piece of advice for aspiring strategic leaders? Create your own stuff

“Create your own stuff, because it’s a way to jump the line. It’s really hard when you’ve not created a lot of stuff of your own that’s become successful independently for people to look at you and want to take a bet on you. But if you’ve done that before, then people are like, ‘Oh, this person can make things that turn out to be really good, so I trust them.’ That’s a permissionless way to demonstrate you’re worthy of responsibility.”

On Outliers, Daniel Scrivner explores the tactics, routines, and habits of world-class performers working at the edge — in business, investing, science, and so much more. In each episode, he decodes what they've mastered and what they've learned along the way. Start learning from the world’s best today. Listen to past episodes for free, be the first to hear about new episodes, and subscribe to Outliers on your favorite podcast platform.

Tagged:
Nathan Baschez
,
Entrepreneurship
,
Strategy
,
Decision Making
,
Enjoy reading this? Share it.
Link copied!
BE THE FIRST TO HEAR
Be the first to receive new articles and episodes as soon as they’re released.
Subscribe
FOLLOW DANIEL

Popular Articles
More
Kevin Kelly of WIRED and Recomendo: On Virtual Reality and What Technology Wants - Ep. 12
Paula Faris: The Emmy-Nominated Journalist on Fear, Faith, and Finding Your Calling - Ep. 11
Mark Sisson of Primal Kitchen: Ancestral Health and Building a $200M Brand - Ep. 10
Casey Putschoegl: How to Bring on an Incredible Executive Assistant - Ep. 9
Carey Smith of Big Ass Fans: Building a $500M Business - Ep. 8
Laurence Gonzales: The Incredible Neuroscience of Survival - Ep. 7
NEVER MISS A NEW EPISODE
Be the first to receive new episodes when they’re released. And get our favorite quotes, tools, and ideas from the latest episode.
You're in! Thanks for subscribing.
Hmm, something went wrong. Can you try again?
By subscribing, you agree to our privacy policy.

I sit down with Mark Sisson — Founder of Primal Kitchen and author of 15 books including the NYT Bestseller Keto Reset Diet — about health, habits, and building a $200M disruptive health brand.

In the world premiere of Outliers, I sit down with Top 20 poker player and peak performance coach Chris Sparks. We discuss how to find your bottlenecks and break through to the next level.

I sit down with Dylan Taylor, CEO of Voyager Space Holdings and one of Pitchbook's 'Top 10 Investors in Space Technology', to discuss the past, present, and future of outer space.